Save $2 off an Adult and $1 off a Child's Discovery Tour ticket at Natural Bridge Caverns. Valid only for onsite purchases of the Discovery Tour, cannot be combined with any other offer. Lim…
View 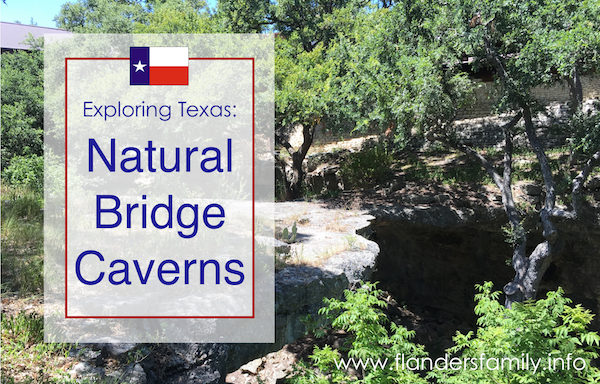 One of our sons finished basic training for Army officers at Fort Sam Houston last month, and several of us drove down to watch him graduate.

While we were in San Antonio, we visited Natural Bridge Caverns and took their “Discovery Tour.” 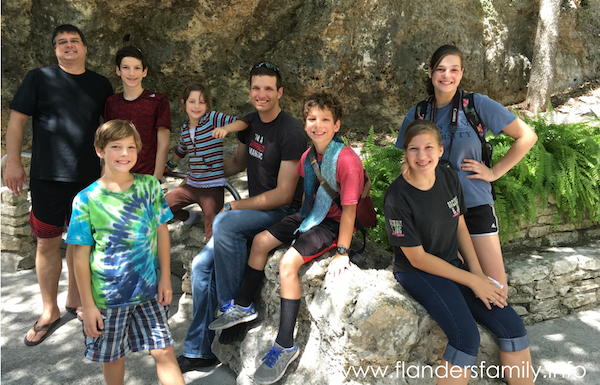 These caverns are the largest in Texas. They were discovered in 1960 by a couple of college students who then obtained permission to explore the vast network of underground passages. 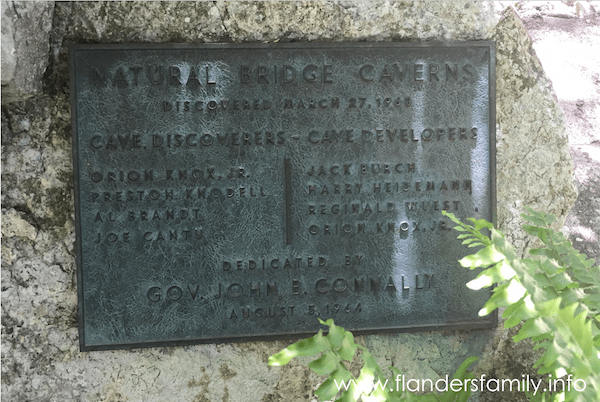 The caverns were named for a 60-foot limestone bridge clearly visible next to the current-day entrance. You can see it in the background in the following photo: 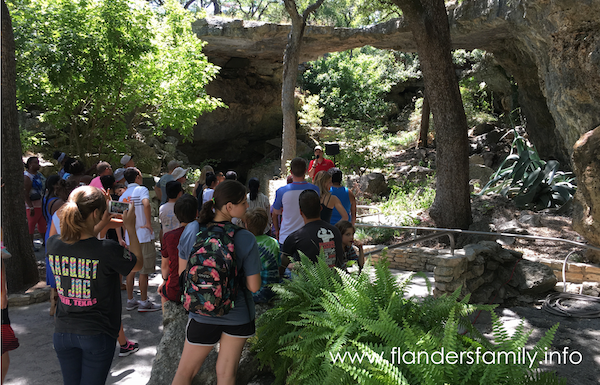 It has been a long time since our last visit to Natural Bridge Caverns, and we were impressed with all the improvements and additions that have been made during the intervening years. 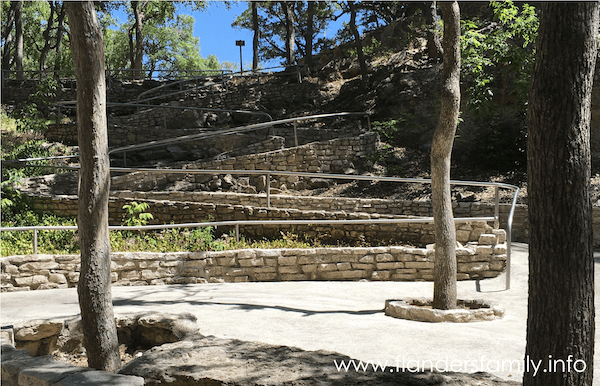 We were also impressed by how many people passed through the gates during the few hours we were onsite. The place was packed, but the workers were surprisingly adept at processing large crowds. Guests were systematically divided into smaller tour groups led by knowledgeable guides who directed us through the caverns at staggered intervals. 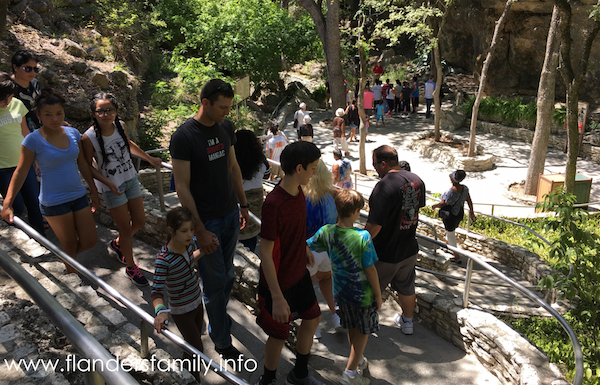 Last time our family went caving, we learned that one of our sons struggles with a touch of claustrophobia. He had a complete meltdown when we took a flashlight tour at a different site. 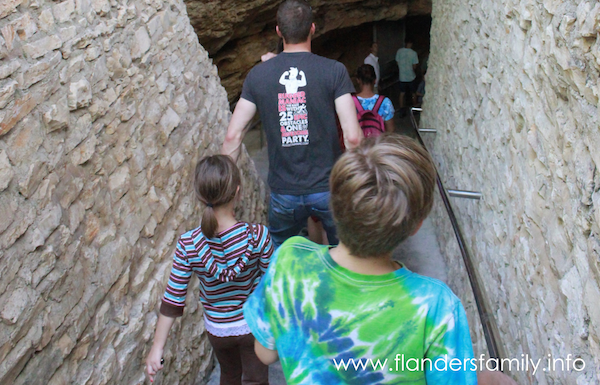 I offered to sit this tour out with him if he didn’t think he could make it, but he faced his fears and came through without a glitch. His sweet siblings helped us keep an eye on him and offered lots of encouragement: 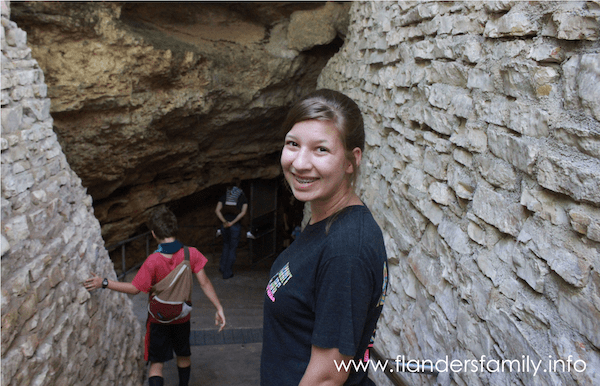 He credits his successful completion of the tour to the fact there was good lighting, large passageways, and easily identifiable cavern workers stationed all along the route. That assured him there would be somebody nearby to help us in the unlikely event of an emergency. 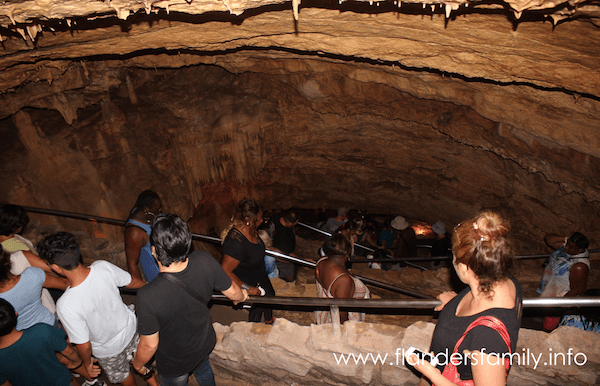 I’m so glad he was there for the entire tour, because Natural Bridge Caverns is home to an amazing array of formations, like this: 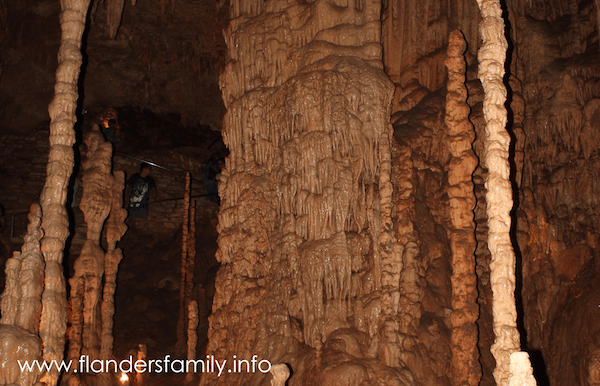 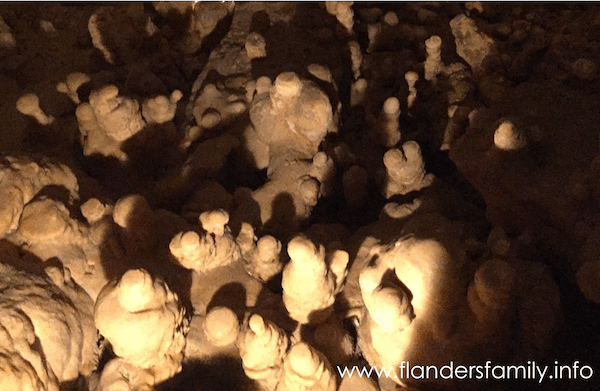 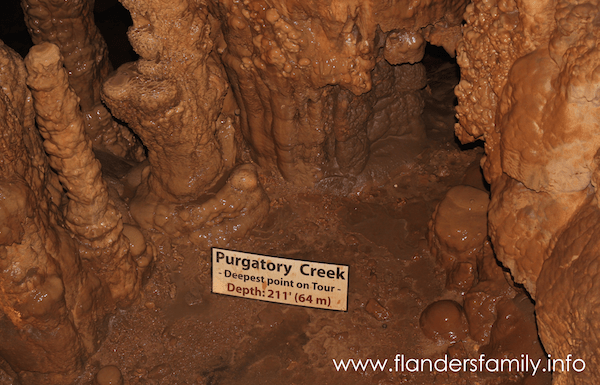 This one reminds me of the leaning tower of Piza: 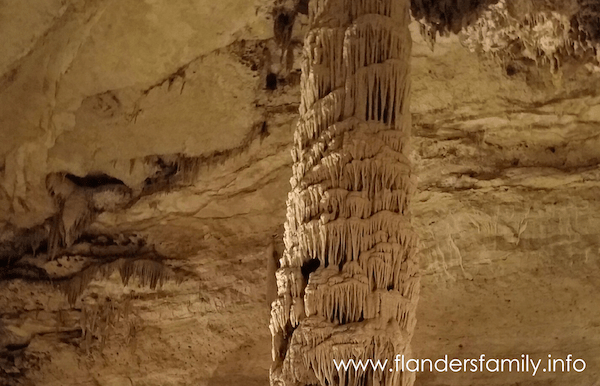 And I think this one looks like a teapot: 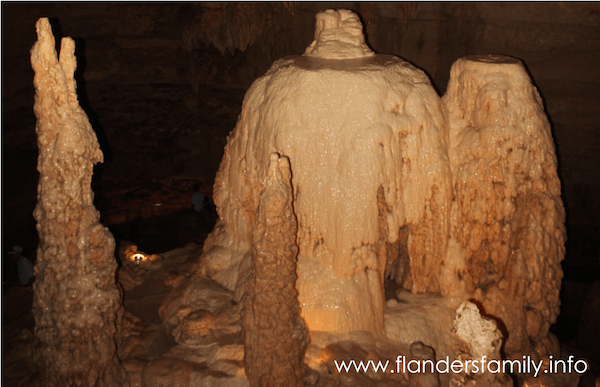 With the exception of one “touch stone” just inside the entry to the caverns, guests are forbidden to touch any of the cave formations. 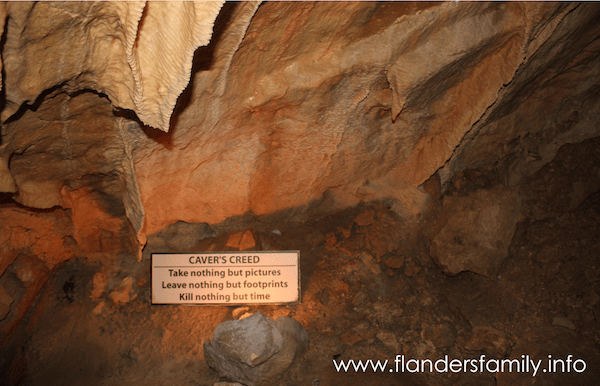 We were allowed to take pictures, though, which we gladly did while we were there, both of the underground sculptures… 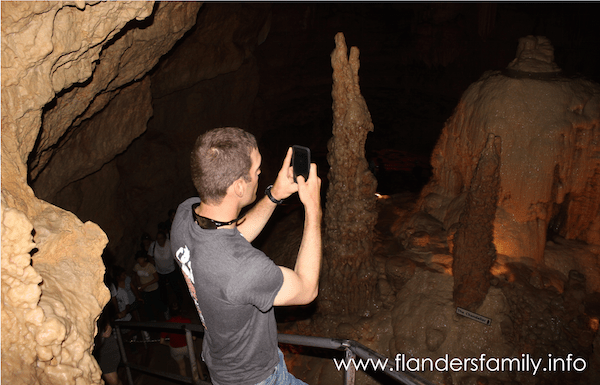 … and of one another. 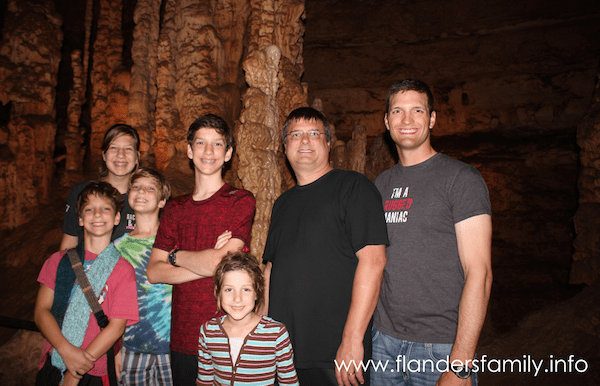 The Discovery Tour is only 3/4 of a mile long, but it descends 180 feet down into the caverns and back up — not a trek for the faint hearted. 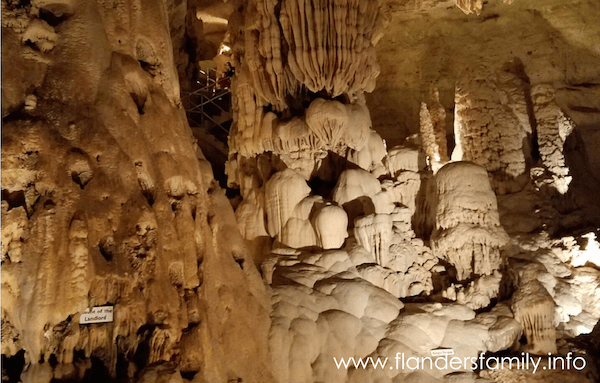 Most of the caverns we’ve toured in the past are a little chilly, so I tried to talk Doug into letting me pass out the hoodies before our descent (despite the sweltering heat up on the surface), but he was of the opinion we didn’t need jackets — and he was right. 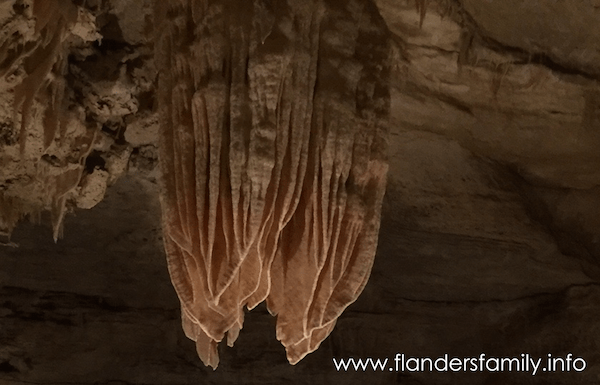 The underground temperature holds steady at 70-degrees, but the humidity makes it feel even warmer than that. 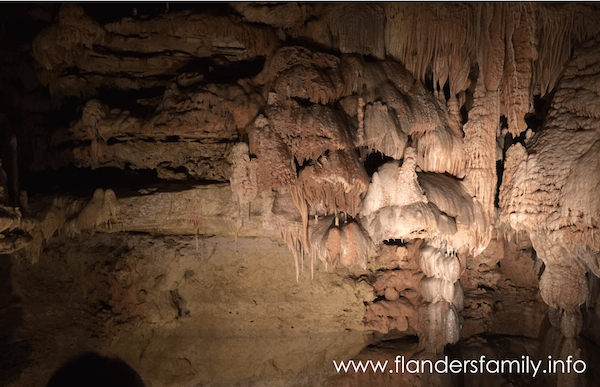 Shorts and tank tops were the perfect outfit for exploring Natural Bridge Caverns. 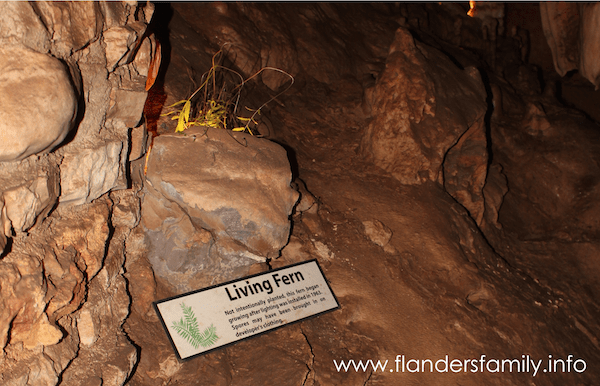 Once you’ve completed the tour, don’t rush off. There’s lots more to do while you’re here… 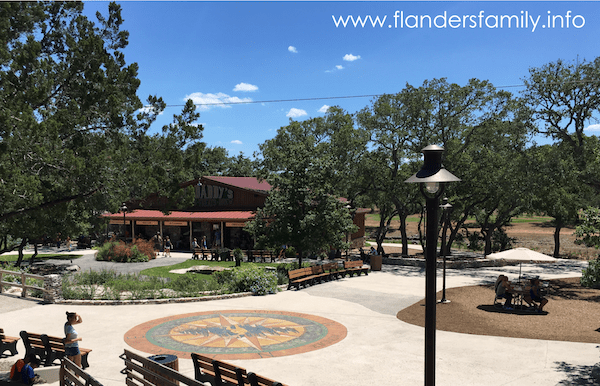 … including a ginormous maze, gem and fossil mining, and a “Canopy Challenge” ropes course with some incredible zip lines. 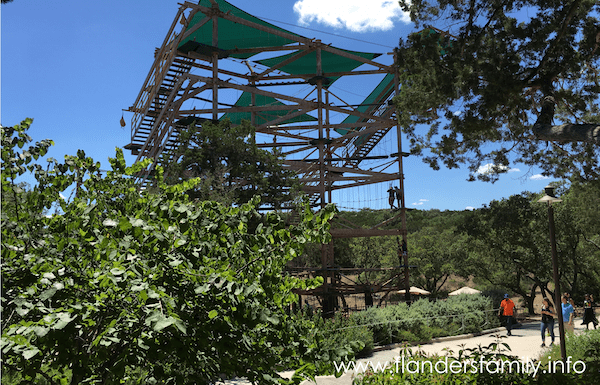 When you are ready to get back out of the sun, there is a huge picnic pavilion where you can rest and enjoy treats from onsite vendors. 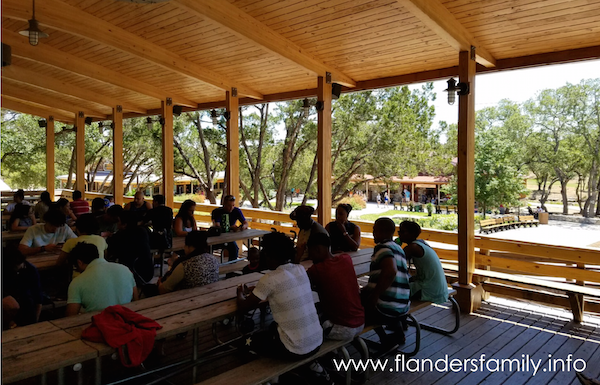 Not a bad way to spend a day with the fam! 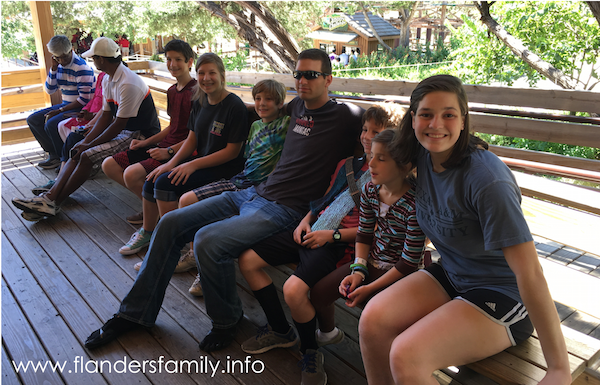 We are grateful to Natural Bridge Caverns and US Family Guide for giving us tickets to the Discovery Tour in exchange for a write up on our blog. All opinions expressed in this review are our own.

Proud Member of The US Family Guide Network